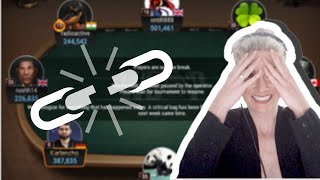 Sarah Herring, aka AuntyChardonnay breaks down the events that occurred during the July 19 Sunday on GGPoker online Bracelet series. She discusses what happened, poker community response, as well as the response of GGPoker.

A server issue caused by an overwhelming number of players logging into the system, and an unanticipated number of observers at the tables, resulted in both Event #32: $100 The Opener and Event #33: $1,111 Every 1 for Covid Relief to be postponed until Sunday 26th July, with just the one bracelet-winner crowned in Event #34.
The site recently confirmed that there were two separate incidents. The first was caused by an influx of players. The 2nd was caused When officials attempted to increase length of late registration to remedy the delays from the first incident and this resulted in a “Server-Client protocol mismatch” that led to certain clients being disconnected.
Later that evening, in the early hours of July 20th, a DDoS attack affected one of GGPoker’s servers that led to players being unable to load the client.

Response: GGPoker have confirmed that a series of “comprehensive fixes” will be carried out during emergency maintenance on July 24th to fix the root cause of the first two issues. Additionally, GGPoker have confirmed that all servers have been checked and added to the DDoS protection service, with a second layer of DDoS protection being added for increased protection.
For the 3,684 players remaining in The Opener, they will each receive a T$100 buy-in for the inconvenience.
In Event #33, GGPoker will be doubling the $177,378 collected for charity.

For more details check out the article on PokerNews:
https://www.pokernews.com/news/2020/07/ggpoker-confirms-site-suffered-ddos-attack-on-wsop-online-37647.htm

To Join the Discord: bit.ly/PokerNewsDiscord