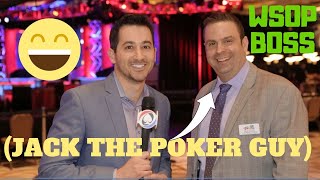 World Series of Poker Tournament Director Jack Effel talks to Jeff Platt about running the extravaganza that is the WSOP.

The Caesars Entertainment Vice President of International Poker Operations (he says just call him, “Jack the Poker Guy”) dives into everything that makes the massive tournament series work at the Rio.

Big Blind Ante talk? You got it. Effel discusses what he likes about the big blind ante, and his plans for introducing it into the World Series of Poker tournament lineup work this summer.

Also, the WSOP TD explains the value of the partnership with Poker Central, and why viewers this summer will be very pleased.