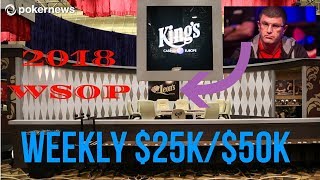 What’s new and noteworthy at the 2018 World Series of Poker? You probably know by now that the Rio All-Suites Hotel & Casino hosts the WSOP.

The Player of the Year formula for the WSOP has also been tweaked. Last year, Chris Ferguson took home POY honors, which caused some controversy (for many different reasons) This year’s formula has been tweaked to weigh bracelet wins and final tables more, while placing less importance on min-cashes in large field/low buyin No Limit events, like the Millionaire Maker, the Monster Stack, and the Colossus.

The King’s Lounge is back, this time introducing high roller tournaments into the mix. Every weekend from now until July 8 will feature a $25k NL Hold’em, a $25k Pot-Limit Omaha, and a $50k NL Hold’em. Leon’s Room will feature high-stakes cash game action, Leon Tsoukernik will certainly drop by his own room for some play.

The WSOP Cafe brings expanded food options into the mix. (And some more phone chargers)

UMG Media Group brings the UMG ESports Stage into the Pavilion Room. Players can drop by and play Fortnight, FIFA, and NBA 2K18.

Jeff Platt breaks down what’s new and noteworthy at the 2018 World Series of Poker.

Chris Moorman’s Always In It to Win It, No Matter What the Stakes!