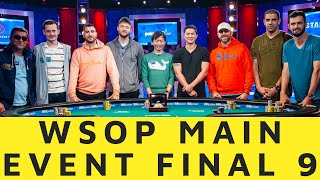 The 2019 World Series of Poker Main Event. is down to just nine players. The final nine players are all guaranteed $1 million, but of course, each player has their eye on the first place prize of $10 million. The remaining players will have Saturday, July 13th as a day of rest and will return on Sunday, July 14th to play from 9 down to 6 players live on TV.
Yesterday, Robert Heidorn was eliminated in 10th place. Alex Livingston busted the final table bubble boy.
Coming into the final 9 as a massive chip leader is Hossein Ensan. He won of the EPT Prague Main Event back in 2015 and has over $2.6 million in live tournament cashes.
Garry Gates comes to the final table with the second biggest stack of 99.3 million in chips. Garry used to work at PokerNews and now works for PokerStars Live Events and VIP Services.
Zhen Cai comes into the final table 3rd in chips with 60.6 million. Cai primarily plays pot-limit Omaha cash, but his friend and poker coach, Tony Miles, knows a thing or two about deep WSOP Main Event runs. If you’ve been following the WSOP coverage, you may know Cai as the player who knocked out Richard Seymour.
Kevin Maahs will come to the final table 4th in chips with 43 million. The Chicago native played smaller tournaments in the midwest, but this year, he decided to come to to Vegas and play his first World Series of Poker Main Event. He max late registered the Main Event by buying in on Day 2.
Milos Skrbic heads into tomorrow 7th in chips with just over 23 big blinds. The Serbian pro recently made the switch from playing high stakes cash games to playing tournaments. December of last year, he got one of his biggest cashes losing heads up to Dylan Linde in the $10,000 WPT Five Diamond Poker Classic.
Alex Livingston will head into the final table 5th in chips with 37.8 million. Livingston finished 13th in the 2013 WSOP Main Event.
6th in chips is well known high stakes pro Dario Sammartino. He has over $8 million in live tournament cashes and is considered one of the best players in the world. Watch to hear Sarah explain what dealer error caused Sammartino to lose an over 60 big blind pot late into yesterday’s play.
Nick Marchington comes to the final table last in chips with 20 big blinds. This is the first time Marchington is playing the Main Event because he is just 21 years old. If Marchington wis, he would be the youngest player to win the WSOP Main Event.
Timothy Su is second to last in chips. Su considers himself a mostly recreational poker player who makes his living as a software engineer. It was Su who now famously busted Sam Greenwood from the Main Event.