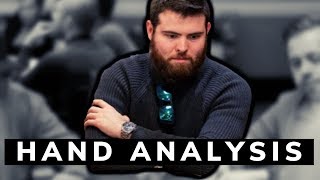 A completed board of {9-Clubs}{8-Spades}{6-Hearts}{k-Hearts}{3-Spades} was spread across the felt with around 300,000 in the pot. There was already a bunch of action on the river that Steven Buckner was kind enough to break down:

Bob Shao checked from the big blind and Jack Sinclair bet 190,000 on the button. Shao check-raised to 600,000, leaving himself with just 305,000 behind. Sinclair responded by shoving all in and Shao was forced into the tank.

It was about eight minutes later that Shao finally made his decision and he tossed his cards to the muck. “Now is a good time to show a bluff,” the table said.

Sinclair turned over {a-Diamonds}{10-Diamonds} for just ace-high and the table was still left in shock that Shao didn’t call off his last 300,000 chips.

Jack Sinclair explains the hand and his thought process throughout.

Is Kenneth Kee the Best Triton Hold ‘Em Player in the World?