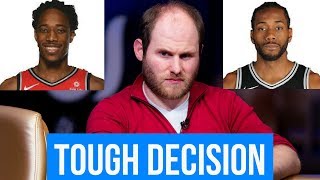 Sam Greenwood is normally seen at the biggest buy-in poker tournaments all over the world. However, at the Triton High Roller Series in Jeju, Greenwood hopped into the $1 million buy-in televised cash game. These were the highest stakes cash game that Greenwood had ever played. PokerNews also gets the answers on several NON poker related questions from Greenwood including if he is rooting for new Toronto Raptor Kawhi Leonard or still loyal to Demar Derozan. Does he think Dan “Jungleman” Cates is the most fun person to play poker with? Or Jungleman the luckiest? Watch to find out!

What is Credit Card Roulette? Poker Players Tell All

Latest News from the 2019 World Series of Poker: July 9