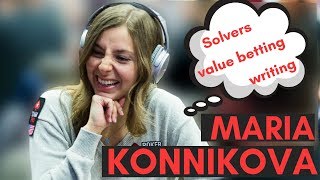 Maria Konnikova has had a sensational start to her poker career. Initially, she began studying and playing poker as research for her upcoming book. However, she was a quick study and began to rack up quite a few wins. One of those wins was an event at the PokerStars Caribbean Adventure which included a “Platinum Pass.” This pass includes airfare, accommodations, and a buy-in to the upcoming $25K PokerStars Players NL Hold’em Championship (PSPC). The event will be held in just three weeks at the Atlantis Resort in the Bahamas. PokerNews chatted with Konnikova at the PokerStars European Poker Tour in Prague. How has Maria Konnikova been planning for the event? Has she been studying? Is Erik Seidel still training her? What has she learned so far about playing poker abroad? Watch to find out!