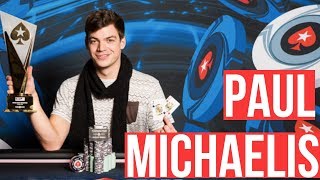 It was unlikely that anyone was going to stop Paul Michaelis from steamrolling the EPT Prague Main Event final table to victory! Michaelis held the consistent tournament chip lead Day 4, Day 5 and the final table. Notable poker player and Twitch streamer, Parker “Tonkaaaap” Talbot, was the first player of they day to be eliminated. He took home €179,360 for his 6th place finish. Out in 5th place was Carlos Branco, followed by Laurynas Levinskas in 4th. Once the action got 3-handed, the players agreed to a deal with Alexandr Merzhvinskii getting 3rd place for €631,500. It was Artem Kobylynskyi, who lost heads up to Michaelis, but took home €571,910 for his efforts.
Paul Michaelis took down the agreed upon €840,000 which also included the elusive Platinum Pass and entry to what many think will be the biggest $25K buy in tournament in history. That tournament takes place in just a few weeks in the Bahamas.