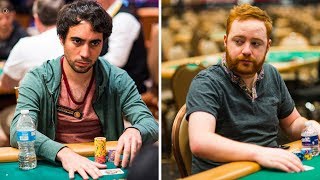 Niall Farrell and Michael Gagliano are room mates, so of course it is all in good fun. But, during Day 1 of the $10K Heads-Up he pulled a sick slow roll to eliminate this friend with Aces. He also managed to lose the key to his Rio box, put on his lucky socks to play Justin Bonomo, but that didn’t work out for him. He reveals that he took a spot he probably wouldn’t have against any other player and busted out with haste.