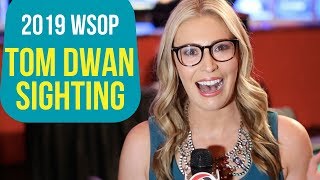 It’s official! We had a TOM DWAN APPEARANCE AT THE World Series of Poker!
Durrr max late registered the $50K Poker Player’s Championship. Unfortuantely, his appearance was short-lived as he was eliminated in the final level of last night.
Michael The Grinder Mizrachi who has won this event THREE times, will not make it a fourth time this year. However, Robert Mizrachi still remains in the field and that could be good news to one lucky Twitter user. Mizrachi is giving 1% of himself in the 50K championship to one lucky RT and follower. You can RT and follow Robert Mizrachi @PokerRob24 on Twitter
Dash Dudley won the $10 Pot Limit Omaha Championship yesterday for just over $1 million
Kevin Gerhart won the $1,500 Razz event for $119,054 and his first WSOP gold bracelet. Gerhart beat out a field of 363 players including Scott Clements and Jennifer Tilly who both made deep runs in this event.
Santiago Soriano wont the $800 No-Limit Hold’em Deepstack Event for $371,203.
The Monster Stack tournament is now down to the final 6 players. The winner of the event will take home a monstrous prize of $1,008,850.
The $600 No-Limit Hold’em Deepstack Championship received 6,140 entrants yesterday! This massive field played 17 blind levels yesterday and are already in the money.
For live updates on all the WSOP events click below;
https://www.pokernews.com/tours/wsop/2019-wsop/
Natural8, officially the 2nd largest .com poker room globally. Play vs Asia, including Rush & Cash; an ante only Fast Fold 6-max cash game. 100% first deposit bonus up to $1688, monthly $100K Tournament Leaderboard, and a $200K Rush & Cash giveaway through the end of July.
www.natural8.com