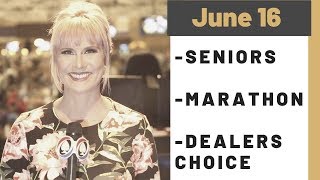 Welcome to your update from June 16th, the 19th day of the 50th annual world series of poker at the Rio all suite hotel and casino.

Two bracelets were awarded yesterday and one of them came in an event that started a week ago!

Event #26: $2,620 No-Limit Hold’em Marathon Jared Koppel, came into the day as the overwhelming chip leader but the heads-up battle was nothing short of exciting. The pendulum swung back and forth multiple times and both players had their opponent on the brink of elimination.Ultimately Russian online poker pro Roman Korenev captured his first WSOP gold bracelet and a payday of more than $477K.

On the other side of the amazon Chants of “Aussie, Aussie, Aussie!” filled the space in the early morning hours as Event #33: $1,500 Limit 2-7 Lowball Triple Draw came to a conclusion after almost ten hour-long levels. Robert Campbell bested a field of 467 to take home a prize of $144K.

Today the 1k Seniors event will come to a close. What started as five thousand nine hundred and sixteen players is now just 19. Last night play was meant to stop at 6 players but after 10 hours of play there were still 19 left in content for the top prize of more than six hundred sixty two k up top I for one can’t wait to get my AARP card.

Event 34 the $1k Double Stack attracted a whopping field of six thousand two hundred and fourteen entries creating a top prize of almost six hundred and eighty eight k. With more than two thousand three hundred and twenty seven players left there is still a a lot of play to be had and with players like Ari Engel, Scott Clements, Diogo Viega Antoine Saout with leading chip stacks we are definitely going to keep our eyes on this tournament.

The $10k Delaers Choice always attracts the cream of the poker crop so to speak and returns today with 11 such players battling it out for the bracelet and more than $300K. Adam Friendman is looking to make history as he attempts to win this event back to back and confirm himself and one of the most versatile players in the game. Other players still in the mix include Fan fav Nick Schulman, the controversial 2018 Player of the year Shaun Deeb as well as Matt Glantz.

The $3k Shootout is definitely a unique and popular tournament with a format that plays out as a series of Sit and Gos until you are left with only one man standing. Three hundred and thirteen players were spread over 40 tables and in the end some of pokers biggest names were left standing including Byron Kaverman, Justin Bonomo, Kristen Bicknell and Andrew “Lucky Chewy” Lichtenberger. Round two will kick off today at 2pm.

We had another 10am start this morning courtesy of the $800 Deepstack event that already has at least a thousand entries but the entries are coming so fast we can barely keep up. But as always as the information comes in from the WSOP the PokerNews audience will be the first to know.

In addition to the low buy in, deep stack tournaments that are sprinkled throughout the 2019 schedule, another type of tournament that is relatively unique to be seen so frequently on the 2019 schedule, an online tournament will be starting its first day today. The tournament begins at 3:30pm local time and late reg will be open until 7:15pm. It is a No Limit Hold Em Knockout Bounty so if you are in Nevada, you can win a WSOP bracelet from the comfort of you own home.
If you are going to be in town on June 30th, be sure to check out the All IN for CP charity poker tournament at the Aria sponsored by the One Step Closer Foundation.