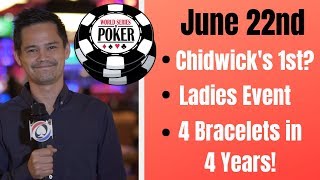 It’s now over halfway through the 2019 World Series Of Poker and here are all of the updates that you need to know today.

Last night saw the $1,500 Bounty tournament crown a winner. 1,807 players started this event but it was Asi Moshe who was the last man standing. Asi takes home his third WSOP bracelet and at one point when they were four handed he found himself with almost 60% of the chips in play. He used his big stack aggressively but then three handed he saw his 7 to 1 chip lead do a complete turn around as he ended up as one of the short stacks. He managed to recompose himself and eventually regained control to knock both of the remaining players out to earn himself $253,000 for his first place finish as well as all that extra bounty money!

Just 7 players will be returning today to finish the $25,000 Pot-Limit Omaha High Roller event. As to be expected there are some big names still left in contention including chip leader Stephen Chidwick. This is Chidwick’s first WSOP event this year as he has just become a brand new Father! Congratulations to Stephen and this tournament could become another new first for him as he looks to win his first WSOP bracelet.

The $1,000 Ladies tournament will see 43 women return today. This event is due to play down to a final 6 players which will be finished tomorrow. Almost 1000 players entered this event which has generated a first place prize of $167,308. Tu Dao was down to just 13 big blinds in the last level of the day but went on an insane heater to run up her stack from around 150,000 to 850,000 which has now bagged her the chip lead. Ana Marquez comes in the day as another chip leader and she is looking to improve upon her tenth place finish in the $1,500 Millionaire Maker earlier this series.

26 will return for the $2,500 No Limit event which saw just shy of a 1,000 players enter. Lots of bracelet winners are still in the field including two time bracelet winners Barny Boatman, David Baker and Kristen Bicknell. The winner of this event will take home a very impressive $427,399 as well as one of those very shiny and very exclusive 50th Anniversary WSOP Bracelets.

The $10,000 Limit 2-7 Lowball Triple Draw will find it’s winner today. There are only 3 players of the remaining 9 who do not currently have a bracelet. Looking to add to their WSOP bracelet collection will be Brian Hastings, Calvin Anderson and Daniel Ospina who will all be taking their seats as well today.

The $2,500 Mixed – Omaha Hi/Lo 8 or Better / Seven Card Stud Hi/Lo 8 or better. Yeah, that event will continue today with 128 remaining from the 401 that entered. Some notable names left in this field include bracelet winners – Phil Hellmuth, Shaun Deeb, who is one of the chip leaders & Eli Elezra.

The second and final flight of the $1,500 Monster Stack kicks off today. Yesterday saw 3,928 players enter Day 1A with just over a thousand advancing to Day 2. Yesterday saw Connor Beresford steadily build a stack throughout the day and at the end he found himself bagging the chip lead with over 400 big blind!
https://www.pokernews.com/tours/wsop/2019-wsop/event-50-monster-stack/

The $10,000 Pot-Limit Omaha 8 Handed event will also begin today. Last year Loren Klein won his third bracelet in this event and just over $1,000,000 after he out lasted 475 other players. In fact, for those of you that don’t know, Klein has etched himself into a WSOP record this year as he recently took down the $2,500 Mixed Big Bet event which means he has now won a WSOP bracelet every year for the past four years. This is something that only Bill Boyd and Doyle Brunson managed to do back in the seventies. Arguably Klein’s achievement is slightly more impressive with him doing it in the modern era of Poker which draw larger field sizes for the events.