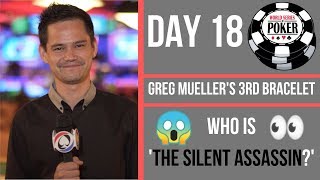 The $10,000 HORSE event finished yesterday with Greg Mueller winning his third bracelet and $425,347. At one point on the final table in Limit Hold’em, he was all in with bottom pair, no kicker and no fold equity. After winning that hand and fast forwarding a few hours, Mueller defeated Daniel Ospina heads up to claim his first bracelet since 2009.

In the $3,000 6-Max tournament Thomas Cazayous won his first bracelet. Cazayous came into the final table as the biggest stack and never dipped below second place. He was nicknamed ‘The Silent Assassin’ by the rest of the final table which he ended up living up to as he picked off the final four players, one by one, to record his biggest live tournament cash at $414,766.

The second and final starting flight of the $1,000 Double Stack began today. Yesterday saw 2,944 players enter for Day 1A which were cut down to just over 1,000 after 11 hours of play. Robert Peacock captured his first bracelet last year and $644,000 first place prize.

The $3,000 Shootout will also kick off today with Joe Cada looking to defend his title from last year which saw him take his third bracelet and $226,218. Cada actually had an amazing 2018 WSOP as he then went on to beat 3,120 players in the $1,500 Closer at the end of the series to win his fourth bracelet eventually finishing 3rd in the 2018 WSOP Player Of The Year leaderboard.

Yesterday the $10,000 Dealers Choice event began with 114 players entering. At the end of play yesterday, well known Jeff Lisandro bagged the chip lead from the remaining 44 players. Not far behind him though is head of the Markup Police Department and 2018 WSOP Player Of The Year – Shaun Deeb. Adam Friedman who won this event last year is still in with a chance at defending his title. In fact there is a long list of very well known players that will be returning today including; Frank Kassela, Nick Schulman, Phil Galfond, Brian Hastings and trying to win his second bracelet of the series Michael ‘The Grinder’ Mizrachi.

In the $1,000 Seniors event 252 players will take to their seats to try and navigate their way through the day to make the final table which will be played out tomorrow. Howard Mash comes in to the day as the chip leader and he will be looking to win his first WSOP bracelet and winning the $662,000 first place prize would more than triple his current total live tournament earnings. WPT Champion Victor Ramdin is another one of the big stacks and Poker Hall of Famer Barry Greenstein will also be taking his seat today.

Five players will be returning today to play out the $1,000 Pot Limit Omaha event. None of the five players are bracelet winners so all of them will be looking to capture their first and the $236,000 up top. This event was actually due to finish yesterday but the overall entries were 540 players up from last year which means that it will need an extra day to finish. Coming in to the final table with over half of the chips is Luis Zedan who has almost 16,000,000 chips of the 30,000,000 in play. Still in with a shot at winning is the UK’s very own Sam Razavi who has a pretty staggering 46 recorded live tournament wins so he will be no stranger to this final table secnario as he looks to win his first bracelet.

The $1,500 Limit Deuce To Seven Lowball Triple Draw will also find a winner today with 17 players returning from the 467 that entered. Hanh Tran comes in to the day as chip leader and will be looking to defend his title after winning this exact tournament last year for $117,000 and his first WSOP Bracelet. Towards the end of the year he then won his second bracelet at the World Series Of Poker Europe in a €560 PLO tournament. That would mean that if he does manage to successfully defend his title he will have won three bracelets in a year, which will actually tie him for the record for the most bracelets won by a player in a single year. The competition is still pretty tough though with lots of bracelet winners still in contention including three time winners – Frankie O’Dell, David Bach and Benny Glaser. Daniel Strelitz is also still in with a shot on winning his second bracelet this series after capturing the $3,000 6 Max title last week.

The $2,620 Marathon will finally come to a close today after five extremely long days of Poker. 1083 players started on this poker adventure and today only 6 will be returning. Jared Koppel comes in today as the overwhelming chip leader with over double the amount of chips that second place player has. He will be looking to win his first bracelet and only his second reported live tournament. His first was two years ago here at the Rio in a $365 Deepstack for $20,707. He’s already surpassed that cash with every returning player being guaranteed at least $80,000. They will all be eyeing up that top prize though which is a mouthwatering $477,000.

For live updates from all the 2019 WSOP events please visit here: https://www.pokernews.com/tours/wsop/