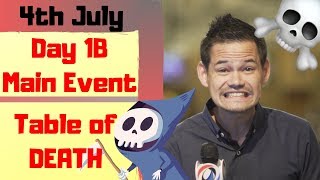 It is Day 1B Of the 2019 $10,000 World Series Of Poker Main Event but before we talk about that, there’s still plenty of other events that have just finished or are about to finish. Rightyo, here we go.

There was nothing Mini about the amount of players that showed up for the ‘Mini Main Event’ over the past few days. 5,521 people forked up the $1,000 entry fee that had the same structure as the $10k Main Event other than the length of the levels. Instead of 2 hours they were just 30 minutes long. This meant that this event finished in 3 days rather than the 10 days that it will take for the real main event to finish. 27 year old French Pro Jeremy Saderne claimed the top prize of $628,654 and his first ever WSOP bracelet. Credit has to be given to Jeremy’s Heads Up opponent too. Lula Taylor was the talk of the tournament as she blasted her way through with her very aggressive playing style. She was heard to be cracking jokes every other minute to entertain her opponents and everyone on the rail.

Six players will be returning today to finish off the $5,000 6 Max Event. 815 players started this event 4 days ago but today someone will win $750,000. There is only one bracelet winner left on the final table and that is Joe Cada. He will be looking to claim his fifth WSOP bracelet. Oliver Busquet is another big name coming into the final table and he will be aiming to win his first bracelet.

The Last Limit Hold’em Event of the series will finish today. 15 players are returning for the $10,000 event and they will be looking to take down the first place prize which is worth just over $300,000. Josh Arieh, John Racener and Eli Elezra are a few bracelet winners that are still in contention. It is, however, Mike Lancaster who comes in to the day as Chip leader. In fact he also finished as Day 2 with the chip lead and finished third in 2015 in the $1,500 version of this event.

The special $500 Salute to Warriors will crown a winner tomorrow as this event takes a day off for the 4th of July. 1,723 players entered this event which saw $40 of each entry being donated to the United Service Organisations and other veteran organisations. 8 players will be coming back to battle for $120,000 which awaits the champion of this event and there will definitely be a new bracelet winner as none of the returning players have a bracelet to their name. Taylor Carroll will come into the final table as an overwhelming chip leader. Caroll retired from the US Airforce in 2015 after spending the best part of six years at Barksdale Air Force Base performing maintenance on the B-52H bomber. +

It is Day 1B of the Main Event which means that yesterday there was the first full day of the 2019 main event. 1,335 ponied up the $10,000 entry fee yesterday for Day 1A with 960 managing to find a bag at the end of the day. Some notable names that will be returning in a few days for Day 2AB are former Main Event Champions Qui Nguyen and Chris Moneymaker. Kelly Minkin, Erik Seidel and 2019 GPI Player of the year Alex Foxen also managed to find themselves a bag at the end of the day. Talk of the day however was how a poker couple powerhouse managed to find themselves seated at exactly the same table. Liv Boeree found herself opposite her boyfriend Igor Kurgunov. Later in the day Dan Smith then sat down next to Igor. Some were calling it, the table of death. Eventually Igor knocked out Liv which then resulted in Liv posting a photo on her Instagram with possibly the best caption of 2019. The post by PokerNews Live Reporter Chad Holloway read – Boeree Busted By Her Boyfriend. Boeree’s response – Noone’s busting on anyone tonight, that’s for damn sure. Faraz Jaka found his table breaking late on Day 1 as he tweeted out: “Our table just broke… like literally broke. Thankfully we sensed it and used our hands to hold it before chips flew everywhere. Even played a pot out one handed”.

Infact, Day 1B of the Main Event is already in full flow today and so far there have been 1,500 amount of players that have entered. The turnout has been huge so far and there are slight whispers in the corridors of the Rio that this could actually be the biggest main event field ever. Remember the largest ever Main Event was Jamie Gold’s 2006 memorable $12,000,000 win where 8,773 players entered. Let us know in the comments below how many players you think will enter this very special 50th World Series Of Poker Anniversary Main Event!

Global Poker is the home of online poker in America – thanks to their massive weekly tournament schedule and the chance to score a six-figure payday in just a couple of minutes through their Jackpot Sit n Go’s! With real cash prizes delivered straight to your bank account and more than one million registered players in the United States. if you are not playing on Global Poker then you are missing out. Head to www.GlobalPoker.com and set up an account today.

For live updates from all the 2019 WSOP events click the link below:
https://www.pokernews.com/tours/wsop

This or That with Kelly Minkin at 2018 WSOP