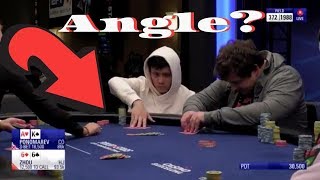 The Return of the Platinum Pass
On Tuesday PokerStars announced, it’s coming back for round two and this time it will take place in one of pokers most coveted destinations, Barcelona. The 2020 Platinum Passes will once again be worth approximately $30,000. Included will be the buy- and money for travel and expenses including a six-night stay in Barcelona for the player and a guest. In a surprise event the first five platinum passes were given away to the qualifiers of the Chase Your Dream – Play Against Your Heroes promotion.

Most eyes today and the cameras of the live stream team will be focused on Day 3 of the Main Event. 191 hopefuls are returning to the felt from a total field, 1,988. There are still a ton of big names in contention including Isaac Haxton, Shannon Shorr, Timothy Adams, Fatima de Melo and Alex Foxen. The internet is abuzz talking about a potential angle shoot that went down on the Live steam yesterday. With Stapes and Spraggy commentating have a look at what had many people asking: What Should be the penalty for something like this?

Let us know in the comments below what you think? And be sure to tune into the watch the main event yourself on the PokerStars Twitch and YouTube.