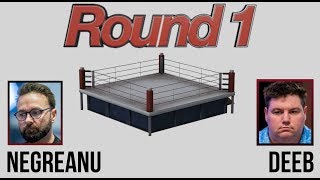 Sarah Herring interviewed both Shaun Deeb and Daniel Negreanu recently asking them about some of the hot controversial topics that they have both been involved in.

In this episode of ‘Fight Night’ we look at Round 1 – Did Daniel Negreanu knowingly cheat in the World Series Of Poker Player Of The Year?

Watch the video and let us know where you would place your bet!

So THAT Happened: Your Source for the Latest Poker Player Feuds and Fun