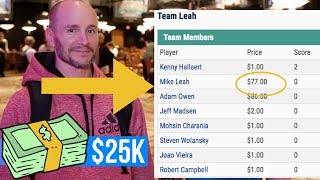 Poker player Daniel Negreanu organizes a $25K Fantasy Poker Draft every year the day before the beginning of the World Series of Poker at the Rio in Las Vegas. Mike Leah won the $25K Fantasy Poker League last year for $150K. PokerNews reporter Sasha Salinger asks Mike Leah who he drafted this year, how he plans to go for back to back wins, how much the winner receives this year, and who he thinks will make a lot of deep runs at this year’s World Series of Poker.

Here’s What Not to Say When Playing Poker in Russia