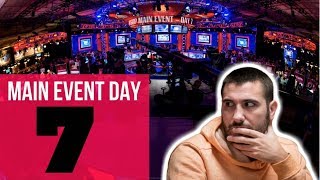 Welcome to your July 12th update from the 50th annual World Series of Poker. It is Day 7 of the Main Event and in the lives of the remaining 32 players left, this is undoubtedly one of, if not THE most critical day of their poker careers so far. But before we delve too deeply into who is left, we must cover who is not.
Many people were speculating at the start of play yesterday, with just more than 100 players left that Antonio Esfandiari was a favorite, if nothing else, he was a crowd favorite for sure. But he was out very early which still left a handful of notables. Jake Schindler managed to stay under the radar, he is pretty notorious for not doing interviews so that could very well be why, but he finished in sixty seventh. Chris Hunichen aka Big Huni was on the feature table for most of the day but ultimately busted out in 54th. Alex Foxen came in short stacked but managed to eek out pay jump after pay jump and ultimately succumb in 40th place which had him walking away with a substantial payday at about 212K.
Nicholas Marchington, who is playing his first main event at the tender age of 21 is at the top of the chip counts and Hossein Ensan, who has a pretty impressive resume including an EPT Prague title and more than two point six seven million in tournament winnings is right behind him. Dario Sammartino is 9th in Chips coming into the day. There is one Brazilian left in the field which in my experience always leads to a boisterous and rowdy rail, Yuri Dzivielevski who already captured one bracelet this summer and is looking to capture the granddaddy of them all.Many in the media and players alike will be rooting for a long time member of the poker industry Garry Gates.

The Little One for One Drop returned today with 5 players and there are just 3 left eyeing the top prize of 690k. Have a look at where the players stand.
Another tournament scheduled to finish yesterday but that won’t crown a champion until today is the $1500 PLO bounty. There are 5 players left including bracelet winner Bryce Yockey.
Six players remain in the 3k no limit with David Gonzales up top and a very capable Patrick Leonard coming in 5th in chips.
The $1500 Mixed NO Limit Hold’em, Pot Limit Omaha is also in its final day today, but unlike the previously mentioned tournaments there is still some significant play in this event. 47 players remain of the 1250 that entered Day 1. Five players in the field will be looking to capture another bracelet to add to their collection including Ankush Mandavia, David “ODB” Baker and Ayaz Mahmood.
In case that wasn’t enough bracelet action for you in one day the $1500 Bracelet Winners Only event will also dish out another bracelet to a prior bracelet winner. There are 8 players left of the 185 that entered.
It’s Day 2 of the 100K High Roller and there are 49 of poker’s best looking to capture one of the most prestigious bracelets of the summer. Continuing an absolutely insane summer Brandon Adams is once again leading the charge with nearly five times his starting stack! Some other big names among the leaders include Byron Kaverman, Mikita Badziakouski, Ali Imsirovic, and Bryn Kenney. After a total of 99 entries the payouts were just confirmed and the last player standing will walk away with nearly $2.8 million dollars and bragging rights among the poker elite.
For those looking to make their summer profitable that don’t have a piece of any of the remaining players in the Main Event, the Closer starts today. This $1500 dollar event last year saw Joe Cada take his 5th place Main Event bust out and turn it into bracelet number 4.

Thank you to 888poker for sponsoring this update! Footage of Greenwood hand from https://get.pokergo.com where you can watch the 2019 WSOP!