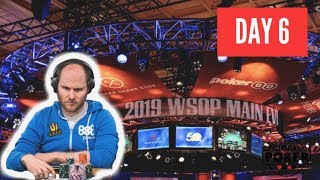 It is Day 6 of the Main Event and what started as eight thousand five hundred and sixty nine has been whittled down to just one hundred and six. I mentioned yesterday that the real pay jumps start around 72 players left when we get to the six figure scores and every decision is rattled with the intensity of that hand and the implied value of the life changing final table everyone is reaching for. As I was walking through the halls of the Rio this morning the vibe has changed considerably from a palpable and contagious excitement to a more somber meditative focus.
Lucky for both fans and the media there in an incredible array of players sprinkled throughout the chip counts and any one of them could make for a worthy champion. Well known pro and 888poker qualifier Sam Greenwood in coming in 2nd in chips today with almost twelve million. He has more than eighteen million in live tournament winnings and is certainly considered one of the best poker players in the world. Another player widely considered one of the best in the world, and in fact the Global Poker Player of the year in 2018 Alex Foxen is coming in with 2.66 million chips so he has some work to do, but this is a spot Foxen has plenty of experience with and as we know in poker just one double up puts him right back to average in chips and then he is dangerous. Other notables we are keeping our eye on include poker industry veteran Garry Gates and Antonio Esfandiari. Chip leader Timothy Su is an unkown player in the poker world for the most part, but with more than nineteen million of the chips in play he is clearly a force to be reckoned with. The software engineer from most Boston made a great point speaking to PokerNews last night when he said, “When the big blind is the starting stack… to think that’s what we all started with is unreal.”
All the players starting today are also guaranteed the cash value of their initial starting stack, for those wondering that is sixty K, up from the 50k Starting stack of last year. The plan today is to play 5 and a half levels and get as close to twenty as possible. Although most people anticipate that is not very likely.
There are no woman left in the starting field today as the last woman standing Jill Bryant bust in the late levels of last night. She is a circuit ring winner and learned poker from her son. I love this story and figured as a public service announcement I’d say, gentleman if you are watching this…why not sit down and play some card with your momma if you can…she might be next years last woman standing.
NFL lineman Richard Seymour will not be able to add a shiny gold bracelet to his collection of rings this year. Well, that isn’t true, I’m sure he could have plenty of gold bracelets any time he wants…but not the world series of poker gold bracelet, he will have to wait until next year to try his hand at that one again.