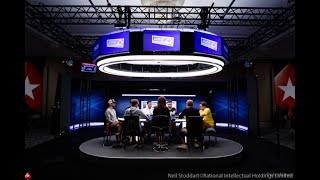 After four days of action-packed poker the Main event, has been reduced to its final sixteen challengers, surviving a record-breaking field of 1,988 entries. Leading the pack is Portugal’s Rui Sousa, who bagged the chip lead with 116 big blinds. Marton Czuczor sits second in chips. Czuczor, a very experienced grinder from Hungary with over 2.4M in lifetime cashes according to The Hendon Mob. Shannon Shorr is still in the mix as is Alexandre Ivarsson who already captured a title at this poker festival. Day 5 will conclude once the final six players have been reached.
Day 2 of the 10k High Roller gets underway with 218 players returning to the tournament area to continue to battle it out for a yet determined top prize. The field is littered with big names as is to be expected in an event like this including: Alex Foxen, Mustapha Kanit, Danny Tang, Fatima de Melo, Dario Sammartino and last years champion Max Silver. Have a look at your leaderboard coming into the day.