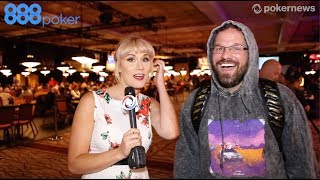 Griffin Benger started his career as an E-Sports star and then became a professional poker player. He skyrocketed into the news with his 2016 WSOP Main Event Final Table deep run and his disdain for opponent William Kassouf which ended in him finally saying, “check your privilege” to the chatty Brit.

Haven’t seen Griffin Benger in ages, so when Sarah Herring spotted him she decided to put him to the test, well it turned out she put herself to the test…and lost. Have you ever played 20 Questions? They key is to identify something in 20 yes or no questions. Griffin is thinking of a poker player and Sarah Herring tries to guess who it is in only 8 questions.

PokerStars testuje nową funkcję „All In Cash Out”