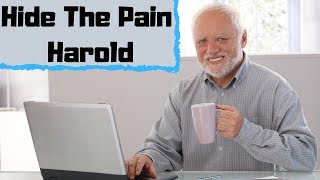 For many years András Arató has been going by the alias ‘Hide The Pain Harold’ after a photo shoot he did for stock photos was taken out of context and became an internet meme. He has shot to worldwide celebrity status and currently has over 350,000 followers on Instagram. He gave up his job as an electrical engineer and now travels the world with his new job as Harold.

Oliver caught up with Harold and found out exactly how he came such a meme and how he feels about all of this new found fame.