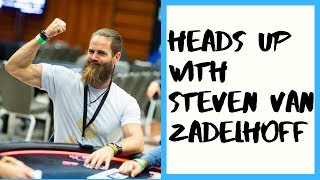 Steven van Zadelhoff who also goes by the nickname ‘The Poker Viking’ is out here in Prague and Oliver caught up with him to find out about his insane run in the recent Battle Of Malta which saw him come 2nd out of 4,657 players to earn himself a very tasty $239,968.

Oliver then challenges Steven to a game of Heads Up, but probably not the kind of Heads Up you are used to!