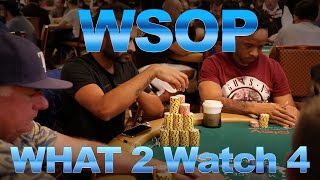 The WSOP POY Race, new tournaments in play, and a Phil Ivey update…Jeff Platt presents “What to Watch for” at the World Series of Poker, brought to you by Global Poker.

Elio Fox already has a significant lead in the race for the WSOP Player of the Year. Fox is coming off a bracelet win in the $10k Super-Turbo Bounty, and a 2nd-place finish in the $100k High Roller. Joe Cada and Nick Petrangelo are behind him on the POY leaderboard.

This week’s schedule features two $10k events on the horizon: the Heads-Up Championship and the Dealer’s Choice.

The numbers are in on the Colossus: more than 13,000 entries, and a $1 million prize for first. Unfortunately, Phil Ivey won’t be taking home the title this year.