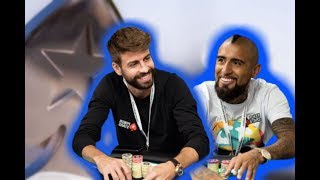 Sarah Herring gives August 27th update from Casino Barcelona.
We crowned four new champions yesterday and we will cover them all shortly.
-Most eyes, and certainly all cell phones yesterday were pointed very clearly at FC Barcelona stars Gerard Pique and Arturo Vidal in the first ever single day €25k high roller. Both stars went deep in the event. Arturo Vidal finished in 5th place and Piqué came runner-up. Ultimately it was Juan Pardo who topped a field of 70 entries to take home the top prize of nearly €500k.
The biggest winner yesterday without question was Sergi Reichack. He took the trophy home for Spain and will take home €1.8 million.

The other tournament to play down to a winner yesterday was the first ever EPT 25k six plus hold em tournament. Russian Pro Mikhail Rudoy had a turbulent day but managed to best short deck regular Chin Wei Lim to take home the trophy.

Yesterday was the first day of the Main Event and if day 1a is any indication of what we can expect from this main event, It is going to be a record breaker. Yesterday saw 726 runners, of which 259 secured themselves a place in Day 2. Of course there was a star studded field in attendance including PokerStars Ambassadors Kalidou Sow, Fatima de Melo, Chris Moneymaker and Maria Konnikova.
We expect an even larger field for today, day 1b and the players are allowed to make one reentry for two entries in total.
If you are looking for some live streaming today you can tune into PokerStars YouTube or Twitch at 1:30 Central European standard time to watch the Chase Your Dream final. https://www.youtube.com/user/Pokerstars