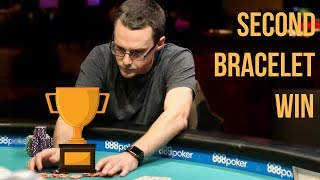 Eric Baldwin won the $1500 No Limit World Series of Poker tournament #41 for his second WSOP bracelet. The final table lasted an extra day with both Eric Baldwin and Ian Steinman returning for heads up play. Baldwin was able to keep his massive chip lead during heads up play and finally knock out Steinman for the $319,580 first place prize. He tells Sasha Salinger of PokerNews that today is his wife, Mary’s, birthday and now they have an extra reason to celebrate!