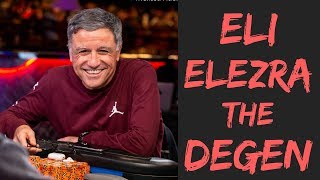 Poker player Eli Elezra recently lost heads up to Paul Volpe in the World Series of Poker $10K Omaha Hi/Lo Eight or Better Championship. Although Elezra took home $258,297, he did not take home the coveted WSOP bracelet. Sasha Salinger asks how that 2nd place finish has shaped his summer. Elezra has played the $50K Poker Players Championship for over 10 years and has the utmost respect for John “Johnnie World” Hennigan and Michael “The Grinder” Mizrachi. Who does he think are the next generation of high level mixed game poker players?