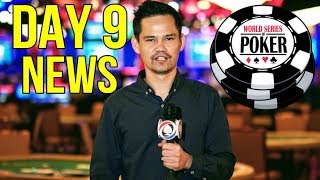 Yuval Bronshtein from Israel won $96,278 dollars yesterday after he won the $1500 No-Limit 2-7 Lowball Draw which actually had the most players for this event that the WSOP has ever seen.

The $5,000 dollar No Limit Hold Em event finished yesterday with Daniel Strelitz coming back from being one of the shortest stacks at the beginning of the day to winning his first bracelet and $442,385 to go along with it. Strelitz defeated Shannon Shorr heads up who had started the final table with over 50% of the chips in play.

The semi finals have been set in the $10,000 dollar No Limit Heads Up event which will finish tomorrow. Ben Yu takes on Keith Lehr whilst Cord Garcia is up against Shaun Swingruber. The winner of each match will fight it out on the main stage for $186.000 dollars and the WSOP bracelet.

It is finally time to crown a winner in the Big 50! Ten days of poker have been played in this event to get through the 28,371 players that entered, we are now down to just 7 that are returning today. Each player has played five of those ten days so it has been a gruelling grind but does have a $1,147,449 payday at the end of the tournament so I’m sure it will be worth it.The average stack coming in to today is around 33 big blinds but play could still be slow due to the pretty insane pay jumps for a $500 tournament.

The $1,500 dollar 6 Max Event will finish today with 21 players returning to take their seats. None of the remaining players have a bracelet to their name so there will be a lot of players trying to win their first. The winner of this event will take home a whopping $407,739. Romain Nussman comes in to today with the chip lead after he had a huge pot sent his way late yesterday when his AA held up against Adrian Mateos’ JJ who ultimately fell in 51st place.

The $1,500 H.O.R.S.E WSOP event will find a winner today as there are only 28 players coming back. First place will take home just over $200,000 by the end of the day. There are plenty of bracelet winners still in contention including Andre Akkari who starts the day 18th in chips and two time bracelet winner Tony Ma who will also have a bit of work to do as he will be returning 22nd in chips.

The $1,500 Millionaire Maker has started today. One lucky player will find themselves winning a pretty sweet guaranteed one million dollars at the end of this long 6 day event. Day 1A kicks off today with Day 1B starting tomorrow. Both flights will combine for Day 2 on Sunday where they will play over the next three days down to a winner. Last years field attracted over 7,000 players with every final tablist earning over six figures. With people still in town from the Big 50 event we expect this one to be another huge field.

The $10,000 Omaha Hi-Lo / 8 or better Championship sees 90 return from the 173 players that entered and in the $1,500 dollar shootout 100 players won their tables yesterday to progress in the shootout as 817 people were knocked out.

That’s all for Day 9 of the 2019 World Series Of Poker, tune in tomorrow for another daily update!

For live updates from all the 2019 WSOP events click the link below:
https://www.pokernews.com/tours/wsop/