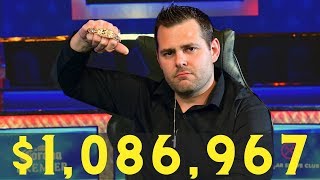 Sasha Salinger of PokerNews interviews Dudley about his boisterous rail which included both his mother Kimberly and fiancé Racquel.
In fact, Dudley tells Salinger how his fiancé bought a lucky piece of his action!
For a full recap of the event click below:
https://www.pokernews.com/tours/wsop/2019-wsop/event-52-10000-plo-championship/