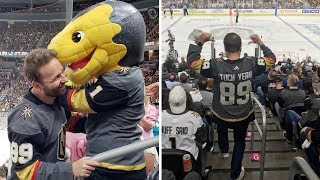 Daniel Negreanu talks to Sarah Herring about the role the Vegas Knights have played in brining Las Vegas together. As an expansion team, the likelihood they would get to the Stanley Cup Finals were next to nothing! But Negreanu got on board before they even had a team and has played a large role in the team. It seemed the entire poker world was watching and Negreanu was in the middle of the action. To catch more from his summer you check out his Vlog here:
https://www.youtube.com/user/DNegreanu