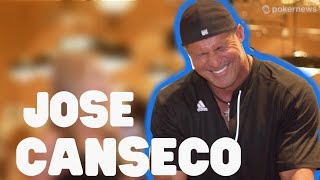 Imagine our surprise when PokerNews found baseball legend Jose Canseco in the 24,000+ field of the 2019 World Series of Poker Big 50 event. The two-time World Series winner (Oakland A’s in 1989 and New York Yankees in 2000) tells Sasha Salinger about his 34-year POKER career, who the best poker player in baseball is, and his thoughts on the Lonely Island’s visual rap album “The Unauthorized Bash Brothers.” The long-form music video, which debuted on Netflix last week, puts the Bash Brothers (Jose Canseco and Mark McGwire) back in the public eye. Did Jose Canseco watch the “The Unauthorized Bash Brothers?” Had he heard of it? Does he like The Lonely Island? Watch to find out!