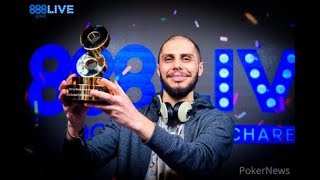 The 2019 888poker LIVE Bucharest Main Event champion has been crowned and it was Darius Neagoe that will take home a huge pay day and a WSOP Main Event seat for his efforts. Last year it was his countryman, Andrei Racolta who shipped the event so they are going to keep the trophy on home soil in the Romanian capital.
Hosted in cooperation with Pokerfest Romania at the five-star InterContinental Bucharest, the €888 Main Event surpassed the guarantee and created a prize pool of €387,638 thanks to 505 entries in total, also topping the 469 entries of the previous year. After cutting a deal in heads-up with Nicolae, Neagoe had locked up €62,300 for his efforts and Nicolae was secured a payday of €59,900 before they battled for the title, trophy and 2019 WSOP Main Event package worth $12,600, courtesy of WSOP sponsor 888poker.