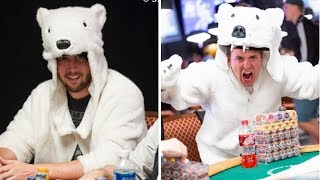 It has been several years since we have seen a polar bear in Day 3 of an event. In 2017 we saw Brandon Shack-Harris playing in this costume and now in 2019 his buddy Eric Rodawig is carrying on the tradition in the same event . $1500 7-Card Stud Hi-Lo 8 or better.
Both players are members of a home game community including the likes of bracelet winner and musician Steve Albini. Part of their game has evolved into a poker clothing line featuring “nittykitty” and this year Rodawig speaks about the release of the next incarnation of Nitty Kitty, Run it Twice Mice. You can check out all of their gear at:
https://nittykitty.com/

Is This a Step into the Future for Pokers Real Grinders? 14000 Poker Players...