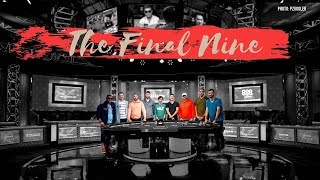 After a week of 12-plus hour days grinding away at the felt in the Rio All-Suite Hotel & Casino, the 2019 World Series of Poker Main Event has come down to nine players. Nine players and one will walk away with $10 million and poker immortality.
Five North Americans and four Europeans. An EPT champion with a monstrous chip lead. A poker industry lifer who crushes the WSOP Main Event. A nosebleed regular with over $8 million in cashes. A little-known software engineer who busted a legend with the semi-bluff shove heard ’round the poker world.
Each has his own story, but they all have one thing in common: they’ve spent the past week making their way through a field of 8,569, and they all earned the right to play for $10 million on poker’s grandest stage.
Have a look at how the players stack up coming into the Final Table.

The favorite heading into the final table appears to be German-based EPT reg Hossein Ensan. With more than $2.6 million in cashes, including an EPT Prague title, few could have imagined the lead with which Ensan would end Day 7.

Second in chips but certainly not in the hearts of a robust rail, Garry Gates had the well wishes of many a high roller coming his way from the poker Twitterverse. They’re familiar with Gates from his years working in the industry, formerly with PokerNews and for the past 10 years helping run PokerStars’ live events and VIP services. Mike McDonald Pretty much Nailed it with this tweet. I’m not a big believer in karma but my god after so many years of putting up with every single high roller diva in poker my god @GarryGates deserved that ace on the river and 10 million dollars of poker player money that are going to follow!

Zhen Cai with 60.6 million is the only other player anywhere near Gates and Ensan. One player nobody wants to see gain any momentum is high-stakes pro Dario Sammartino. The Italian with the piercing stare and $8 million in cashes would be the clear favorite, all things being equal. Luckily for everyone else, all things aren’t evened out, and he sits sixth in the counts with a little more than thirty big blinds.
However, plenty of play remains as even the shortest stacks — belonging to start-of-day leader Marchington and Day 6 giant slayer Timothy Su — are good for twenty big blinds. In the WSOP Main Event’s famously slow structure, they’ll have a bit of time to look for a spot to double right back into contention.

Nine players remain, and each will be hoping he’s the one that will walk away with ten million dollars and pokers biggest prize. And Lucky for us, we all have a seat to watch 3 days of the most exciting tournament all year. You can watch the action on ESPN 2 at 7pm or you can get all the LIVE hand for hand action with us here on PokerNews.com

How Much Would it Take You to Go Vegan for a Year?