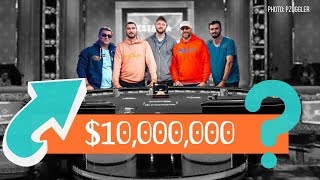 Hello everyone and welcome back to our coverage of the 2019 world series of poker Main event, I’m Sarah Herring and this is what you need to know.
The 2019 World Series of Poker Main Event final table began on Sunday evening with nine players remaining from the second largest Main Event field ever of 8,569 players. Hossein Ensan was well out in front with sizable chip lead and Garry Gates was comfortably in second place.
After a tad more than three hours of play, Ensan remains chip leader. Gates is still in second but made the biggest move. He won 11 of the 56 hands played, tied with Ensan. While Ensan only added about 31 million to his chip-leading stack, Gates increased his stack by about 73 percent with the 74.4 million he accumulated. Between the two of them, they hold about 75 percent of the chips in play.
Have a look at the chip stacks coming into play.
Although Dario is coming in the shortest stack, he is nothing but hopeful.
The first to depart from the final table was Milos Skrbic. On the sixth hand of the night, and sitting eighth in chips at the time, Skrbic was in the big blind and when Gates set him all in from the small blind, Skrbic called all in for 17 big blinds with ace-jack. While he usually would be ahead in this spot, he was actually dominated by Gates’ ace-queen. No help came for Skrbic and the Serbian was out in ninth place for $1,000,000.
Just a few hands later, Timothy Su raised all in from under the gun for about 18 big blinds and Ensan looked him with ace-jack. Su was slightly ahead with pocket threes, but the runout gave Ensan jacks full of fives to end Su’s Main Event in eighth place for $1,250,000.
On the 32nd hand of the night, Ensan min-raised from the cutoff and the United Kingdom’s Nick Marchington made a stand for his remaining 12 big blinds with ace-seven. Ensan had the goods with pocket kings and held up, ending Marchington’s run in seventh place for $1,525,000.
Play was initially scheduled to end for the night when six players was reached, but the decision was made to keep it going a little while longer.
Zhen Cai, who began the final table third in chips, was very active in his attempt to chip up, but ultimately was eliminated in sixth place. With a raise and a call before him, Cai picked up ace-king in the big blind and committed his stack of about 24 big blinds. Ensan had opened the pot and folded, but Kevin Maahs called with pocket nines. Cai flopped a Broadway draw but couldn’t get there, finishing in sixth place for $1,850,000.

If anyone were to emerge as a villain in last nights coverage it was definitely Kevin Maahs. What started as unnecessary tanking ended in Maahs rail doing the “nah nah nah nah” after Zhen Cai bust. This is pretty generally accepted as poor sportsmanship in the poker community. Feel free to cheer on your guy, but no need to rub it in as someone exits the tournament.

The sentiment among the poker community just was summed up in a tweet from Danielle Anderson.

How NOT to win over the fans during @wsop main event. 🤣 pic.twitter.com/9PoqK3VvvQ

At this stage, just five candidates remain in contention for a $10 million prize. They’ll continue to play with just over 28 minutes remaining in the level. One thing is for sure, life changing pay jumps are happening right before our eyes and of course we will have all the live action for you live hand for hand on PokerNews.com

And thanks to our sponsors Global Poker, the fastest growing poker site in America.

Global Poker is the home of online poker in America – thanks to their massive weekly tournament schedule and the chance to win through their Jackpot Sit n Go’s! With more than one million registered players in the United States. if you are not playing on Global Poker then you are missing out. Head to www.GlobalPoker.com and set up an account today.