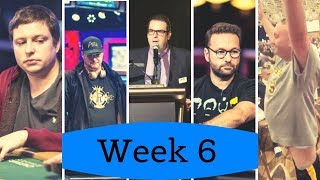 Welcome to your weekly Round up from 888poker at the 50th annual World Series of Poker. It is Week 6 and there has been a ton of action, this past week so lets get right into it.
Brandon Adams who won the WSOP.com online high roller and explained to Will Shillibier that the jury is still out on exactly what an online bracelet means.
https://www.pokernews.com/video/brandon-adams-wins-online-high-roller-for-411-560-12063.htm
The Final Fify concluded today after an incredibly stacked final table, which is to be expected. This is known as Event 90 since it was actually an event added after the schedule was already released which left players in the 25k fantasy draft in an unprecedented position of deciding whether or not to include this event in their draft. Ultimately it was Danny Tang who captured his first bracelet and I was table side after his win.
Not everyone was a winner last week and in fact several people were asked to leave the Rio and never return to Ceasars properties again. Russian pro Georgii Belianin, was DQ’d after winning a small pot and swiping a dead stack into his own.
Jack Effel, the Vice President of the World Series of Poker responded by saying that “you shouldn’t touch chips that don’t belong to you, plain and simple.” While I think most players would agree with that, Many players piped up in defense of Belianin saying this was out of character and some players who witnessed the moment said that he was very clearly intoxicated. Belianin subsequently released a statement asking the poker community and the WSOP for forgiveness and explaining he has been experiencing some person issues and was extremely intoxicated. There has been some talk the trespass may eventually be removed but at this point it is all speculation and we will keep you posted as the story evolves. You can find the complete statements in the article in the description below.
https://www.pokernews.com/news/2019/07/georgii-belianin-addresses-wsop-disqualification-34782.htm
The other DQ was probably more talked about, or if nothing else slightly more extreme. A player, who is yet to be identified to the media went all in blind, dropped his pants and then threw his shoe at the dealer. This video courtesy of Scott Davies.
Well apparently the player was not done yet as he was later videoed exhibiting similar antics at the Luxor.
https://www.pokernews.com/news/2019/07/the-muck-two-players-disqualified-from-wsop-main-event-34755.htm
With six weeks of the 2019 World Series of Poker in the books, no less than 74 bracelets have already been awarded. But with more than a week left to go, there are still 16 more to be won. There are also still plenty of opportunities for players to accumulate 2019 WSOP Player of the Year points to make runs at the title.
After winning his second bracelet of the summer last week in the Event #67: $10,000 Seven-Card Stud Hi-Lo Championship, Robert Campbell swiftly catapulted from No. 11 to No. 1 in the POY rankings. A week later he’s still on top, with Dan Zack (No. 2) and Phillip Hui (No. 3) also right where they were after Campbell passed them. Although Shaun Deeb is currently chip leader in the little one for one drop at number 4 so…this race is going to be close and Shaun is looking to be the first player to win back to back player of the hear titles, and probably a ridiculous amount of money in prop bets. Have a look at where the players stand as of today.
https://www.pokernews.com/news/2019/07/2019-wsop-poy-6-robert-campbell-34794.htm
A nearby 7.1 magnitude earthquake in southern California sent shock waves through the Rio, creating somewhat of a panic in the halls of the convention center. Officials decided to send the players on dinner break early as a safety precaution. Uncle Ron Capture what it looked like and shared on his Twitter.
Fans were disappointed when Phil Ivey, Daniel Negreanu and Phil Hellmuth all busted the Main Event early on. Daniel made an incredible fold before he busted showcasing his reading ability and reiterating the line he is notorious for “everything conveys information.” And Phil Hellmuth, well, he was the quintessential Phil. Hellmuth late regg’d the Main after missing much of the WSOP on a holiday with friends and family. The hand that sent Hellmuth off the rails was a failed triple-barrel bluff with five-high where he was called down by Kou Vang in a three-bet pot. In his exit interview with Kara Scott via PokerGO, Hellmuth “in the Main Event you’re dealing with people that just don’t play very often, and so when you try something sophisticated, it’s very difficult to get away with it. It is my fault and I own it.” Now I might have reacted different but Vang was a class act all the way and based on Phil’s Twitter it looks the PokerBrat antics were received well and the two might have a bro-mance in the works.
Next week will be the last highlights video of the 50th annual world series of poker and we will have a new champion!