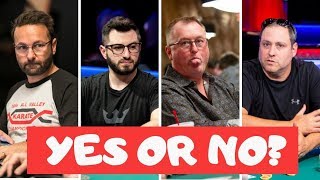 The recent addition of a $50k Final Fifty High Roller to the 2019 WSOP schedule threw a wrench in fantasy leagues that are designed for the World Series of Poker and are also the basis for a lot of side bets. The leagues, the $25k Fantasy run by Daniel Negreanu and the $2.5k Fantasy league run by David ‘ODB’ Baker, have a lot of money on the line and decisions are made during the draft based on the WSOP schedule.

Immediately, players involved began to debate whether or not to add the added $50k into the draft. Negreanu proposed to appoint an arbitration committee of three to hear arguments on either side and make a final ruling.

You can find more on the debate here:
https://www.pokernews.com/news/2019/06/the-muck-gagliano-vornicu-kessler-odb-fantasy-drama-34447.htm?itm_content=pn-hp-hero-6

What do you think?