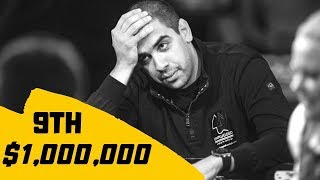 Action folded to the small blind, and Garry Gates shoved all in for about 18 million effective.

Milos Skrbic quickly called out of the big blind and both players tabled an ace.

The 10d 9h 7h flop brought a little help for Skrbic in the form of a straight draw. The 4d turn was a brick, as was the 5h river, rendering Skrbic the first player busted at the final table.